The Biggest Problems (Part 6) in Project Planning and Execution

PART 6 – Responsibility at the Task Level is Unclear

A common stumbling-block for companies appears well into the project planning and implementation stage, when roles have been decided but actual responsibility at the task level is lacking. We have detailed several causes and effects below, along with a best-practice solution to help you ensure that your project has the greatest possible chance of success.

While the overall project aim, timeline, team, and roles may have been defined, often the tasks that are needed to move the entire project forward are not sufficiently detailed. Some necessary tasks may be overlooked altogether and others are not assigned to the appropriate person.

The solution for this is to have a constantly-updated chart where the individual tasks are clearly detailed, along with the team member responsible for each one and a completion date.

Thousands of project team members around the world use a Cadence proprietary tool, the Responsibility Matrix. Unlike the RACI chart, the Responsibility Matrix is a tool that graphically shows you, at a glance, what everybody on your project’s core team is working on at the task level, and who is responsible for each task on your project.  It will also show you if the workload for the project is evenly spread out among team members.  It will also reveal if someone that you thought should be on your core team really isn’t necessary.

The Responsibility Matrix is a simple tool. It’s a grid with the core team (recommended to be no more than 16) listed vertically on the left side, and the tasks listed horizontally along the bottom of the chart. A dot is placed on the intersection of the team member and task where that team member agrees to help complete that task. If there is a circle around the dot, then that team member agrees to be responsible for completing that task. (see example below) 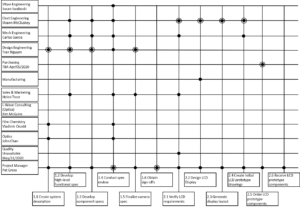 At a quick glance, you can see how the workload is distributed among the team members. If you see someone without any dots or circle dots, then you may reconsider that person’s role on the team. On the flip side, if you see a team member with most of the circle dots, then you may want to question if it is really necessary for that person to be responsible for all of those tasks, and negotiate with the rest of the team to relieve that person of some of the workload.

With the Responsibility Matrix, you can also begin to estimate the budget and time that will be needed for the project. Simply ask each team member to estimate their level of effort for each task that they are either contributing to or responsible for. Total it at the bottom and you will have an estimated level of effort for each task, which can be used to extrapolate an estimate for both the budget and the schedule.

Sometimes work on the project commences with persons working alone rather than collaboratively, which leads to some tasks being unnecessarily duplicated and other tasks not getting done at all. Close collaboration between team members is vital, so that everyone is clear what tasks are being done by whom. It is likely that the need for some work will only become apparent once the project is in motion, which is why it is so essential that the team is kept up to speed with brief status meetings at appropriate intervals, typically weekly. Extremely critical projects may require more frequent status meetings.

Sometimes too many people are working together on the same task. This may sound unlikely but it does happen, particularly where one deliverable is perceived as being more interesting, higher profile, or of greater status than the others. It is important that the volume of labor assigned to each task is reviewed and reduced if appropriate.

Finally, unclear responsibility at the task level may lead to the project manager being responsible for everything, whether intentionally or unintentionally, trying to make progress on far too many tasks by themselves rather than relying upon the team assigned to the tasks.

We see this most often where the project team is comprised of employees drawn from different silos of the business, meaning that the project manager has few if any direct reports or line authority over the others on the project team. There is, understandably, a certain amount of friction between the sometimes-conflicting priorities of those on the team and the tendency will always be for affected team members to default to the more familiar priorities of their own department.

This can be overcome by close communication between the line managers of those on the team and the project manager. Team members need to realize the importance of the project to their department as well as the company as a whole and it is usually a good idea for them to set aside dedicated ‘do not disturb’ time where they can focus on their specific deliverables related to the project, rather than their regular duties.

Certain types of projects also benefit from dedicated times where the project team can work on their tasks in collaborative atmosphere, away from their regular desks or workspaces. Some companies now actively encourage ‘hotdesking’ where employees do not have a set place of work but instead move around the office, switching rooms as well as roles and responsibilities. This concept can be used to jump-start a project, or to revive a project that is starting to fall behind schedule – not only does it encourage more collaboration within the project team, it also brings a new level of focus and impetus. If your organization has the space and the facilities, then a dedicated ‘project room’ for this kind of collaborative work can speed up the successful execution of a project.

So, to summarize, if you are finding that a project is proceeding at a fitful pace and that some tasks are being overlooked while others get duplicated, more communication and on-the-job planning is generally the required solution. It is often prohibitively time-consuming to plan in advance every detailed task that will be required in order for a project to be successfully executed, but as long as you have the right people in place along with a strong atmosphere of working together and communication, these tasks should be completed in a timely fashion to allow the project to stay on track!

If you or your team are struggling to plan or implement projects, maybe it is time to consider calling Cadence, the recognized experts in the field, for specific training and advice that will pay back many times over in the years ahead.